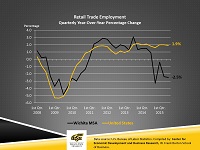 This graph displays the percentage change in retail trade employment in Wichita compared to that of the U.S.

The Wichita Inudstry News and Developments report below contains more details regarding local business changes announced in the third quarter of 2015, as well as the notable expansion and additions taking place in Wichita's automotive industry.