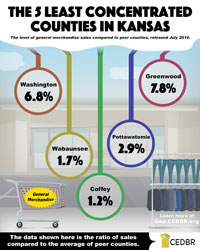 General merchandise stores include department stores, supercenters, warehouse clubs, and other establishments specializing in the sale of a general line of retail goods.  These stores are an important part of the retail economy in many Kansas communities.