Total employment in Kansas grew 0.9 percent in 2018 to approximately 1,415,800 workers, which added more than 12,000 new workers to the Kansas economy. The growth was broad-based, with all major sectors of the economy adding jobs. This marked a notable upswing in the Kansas economy after growing by less than 4,000 in 2016 and 2017 combined. Kansas’ unemployment rate continued its eightyear-long trend of decline in 2018 to reach 3.4 percent, the lowest level for the state in 20 years. Unemployment continued to decline for the state into 2019, falling to 3.3 percent in June 2019. Employment growth is expected to continue throughout the year, expanding by a projected 0.8 percent in 2019. Growth is projected to slow modestly in 2020 to 0.6 percent, adding approximately 9,000 new jobs to the state economy. However, due to high levels of uncertainty at both the national and global levels, and elevated national recessionary risks, the projected range for Kansas employment is between 1.1 percent and approximately zero growth. 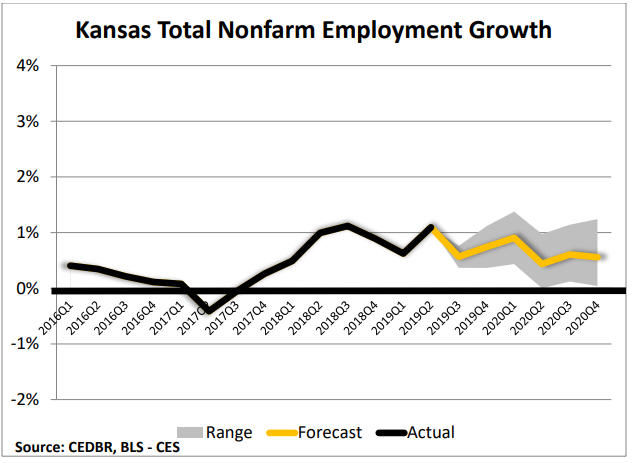