The Topeka metropolitan area’s* total nonfarm employment declined by approximately 800 workers in 2017, a 0.7 percent contraction.  The contraction followed five years of employment growth from 2012 to 2016 when the Topeka area added 3,600 new jobs, growing an average of 0.7 percent.  The Topeka area has lagged behind the rate of employment growth statewide each year since 2011, with the exception of 2016, when Topeka grew 1.1 percent compared to Kansas’ state average of 0.3 percent.

Employment in the area is forecast to be relatively flat in 2018, with approximately 100 jobs lost.  In 2019, employment in the Topeka area is projected to grow by 0.3 percent, rebounding some from a sluggish 2017 by adding almost 300 new jobs overall to the local economy.

Taxable retail sales declined 2.6 percent on an inflation-adjusted basis in 2017, the first decline in retail sales since 2013.Retail sales are expected to recover and grow 0.4 percent after adjusting for inflation in 2019. 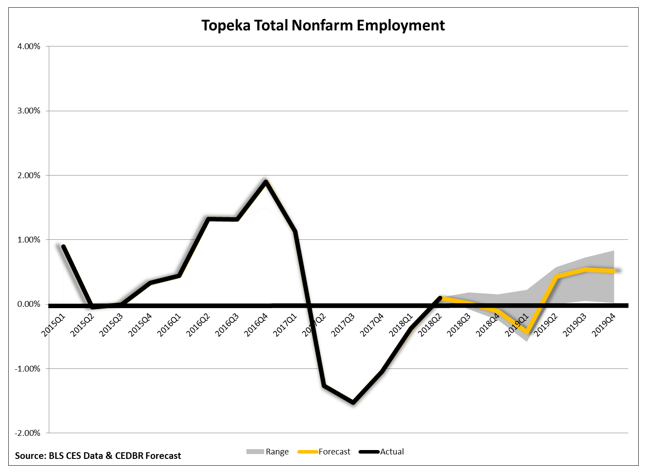